Strom Thurmond and the Lies of Segregation 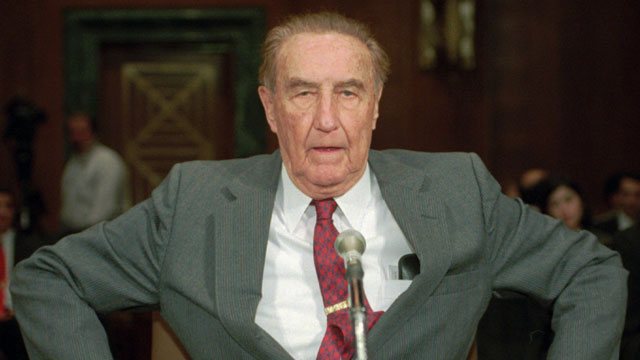 The career of Strom Thurmond necessarily carries the noun attachment of hypocrisy. But somehow the word is too weak to describe what happened with Strom Thurmond, his vicious racism and the rape of Carrie Butler. Hypocrisy is defined as: the practice of professing beliefs, feelings, or virtues that one does not hold or possess; insincerity.

While hypocrisy is certainly applicable to Strom Thurmond’s career, the word fails to describe the immensity of the injustice, enormity of the crimes, or the contemptibility of his actions.

Strom Thurmond’s career symbolizes politics in 20th century America. After all, the South controlled politics from the beginning of the 20th century to the criminal theft of the presidential at the end of the millennium.

In 1925 Thurmond committed statutory rape of Carrie Butler. Fifteen years old and working in the Thurmond home, Carrie Butler suffered the fate of many young black women in the South. On December 18, 2003, Essie Mae Washington-Williams, Carrie’s daughter, stated that Strom Thurmond was her father and that he had had an “affair” with her mother. (NYT 12/18/03, p. 1 and 25)

“But historians say ‘affair’ doesn’t quite cut it—that in that time and place, intimidation and fear had to be a part of any relationship of this sort, whether consensual or not. South Carolina was an apartheid state in 1925, completely segregated, where the racial code was brutally enforced. At the time, Mr. Thurmond was an unmarried teacher and a high school coach in the little town of Edgefield. Mrs. Williams’ mother swept floors and did dishes in the Thurmond home.

‘White men were king,’ said Valinda Littlefield, a professor of African-American history at the University of South Carolina. ‘She was basically a child. He can do with her what he wants. She’s more or less the family’s slave.’

No one is saying that Mr. Thurmond raped the teenager. But at the time, many black families who sent their daughters off to work as maids equipped them with straight razors or tried to get placed in homes without young men, Dr. Littlefield said. The fear of rape was very real for blacks, while white men saw access to black women as a time-honored privilege.” Jeffrey Gittleman, NYT, Week in Review, p.3, 12/21/03.

But even this statement, damning though it is, does not accurately describe Strom’s Thurmond’s crime. Contrary to Gittleman’s statement, one must say that Thurmond raped Carrie Butler at the age of 15. In order to appreciate the enormity of the crime, one need only remember the Scotsboro boys, charged with rape and jailed. Any black man who even looked or whistled at a white women would be jailed, hung or lynched as happened to Emmett Louis Till in 1955. Thurmond began his career committing the crime of which no one speaks. Instead, then as now, the national media panders to white fears of the black rapist while ignoring the much more prevalent acts of rape by white men.

“In the history of the United States, the fraudulent rape charge stands out as one of the most formidable artifices invented by racism. The myth of the Black rapist has been methodically conjured up whenever recurrent waves of violence and terror against the Black Community have required convincing justifications.

Writing in 1983, Angela Davis captured the essence of the issue presented and exemplified in Strom Thurmond’s career. He built his career fighting for segregation, the legal foundation of which was separate but equal. Obviously, at no time during his life did he accept the separation of the races. Nevertheless, Thurmond spent his entire career to prevent equal treatment.

Every time Strom Thurmond defended Jim Crow segregation, he knew it depended on rape, lynching, exploitation, and oppression. In other words, he lied every time he took a political position. The entire ideological structure was built on lies and injustice. Ms. Washington-Williams said Strom Thurmond “was not a racist in his heart.” (NYT- 12/20/03, p. A 14) If not, then he was a liar to the very depths of his soul. The people who are attacking her now for not speaking up earlier are playing the same tired song of “blame the victim” that this country uses to excuse the crimes of this society.

It is insufficient to say that those were different times, with a different moral context. Conservatives have spent millions of propaganda dollars railing against moral relativism. Contending there are absolute, immutable moral imperatives, conservatives cannot abandon that position once their ideological bankruptcy is exposed. They were not the “best” generation; they were not even an honest generation. They may have been the most arrogant generation. Their crimes were excused or ignored, at least by them.

These issues are burning questions today.

“Mary T. Thompkins Freeman, a niece of the late senator, who died at 100 in June said Ms. Washington-Williams’s announcement ‘was like a blight on the family.’

Like others, Ms. Freeman heard rumors for years that her uncle, a legendary politician in the South who rose to fame as a fiery segregationist, had fathered a child with a black maid. But she never had to confront the truth, not like this.

‘I went to a church meeting the other day and all these people came up to me and you could tell they didn’t know what to say,’ Ms. Freeman said. ‘For the first time in my life, I felt shame.’ NYT, 12/20/03, p.1 (emphasis added)

Apparently, Mary T. Thompkins Freeman never felt same for Thurmond’s support of a system that condoned the open terroristic suppression of the African-American community, a system that required rape, murder, unjust imprisonment, impoverishment, under education, undernourishment, and under representation with over taxation of an important, courageous section of the population.

The ideology that expresses shame for the exposure of the sexual predation of one of its leaders simultaneously condones that sexual predation as long as it is not exposed. It is the exposure that is the problem or this ideology, not the act itself. Conservative ideology whether symbolized by the career of Strom Thurmond or expressed in the lies of the Bush cabal is an ideology built on mendacity.

The current administration has substituted “color blind ‘ society for separate but equal. But it is still an ideology built on lies, oppression and exploitation. There is nothing “color blind” about our society just as segregation accepted neither separation nor equality. The entire conservative philosophy is built on mendacity and economic exploitation. Mendacity is a base pillar of conservative political posturing. The Bush administration could lie to the American public in order to justify sending American workers to die in Iraq for the enrichment of a small group of war profiteers because that is an inherent part of its philosophy. Lies for the enrichment of its supporters is the Bush mantra.

Still attacking her, conservatives expose the petty narrowness of their philosophy. Her presence and the power of her benevolence expose the conservative fiction that racism is a thing of the past. The conservative media has created this strange cultural phenomenon. Whenever a racial confrontation occurs, it is described as everything but racism. Even Ms. Washington-Williams denies that Strom Thurmond was a “racist in his heart.”

Racism is the last explanation for an event. Ironically, whites, blacks, and all other ethnic groups will deny racism as an explanation until there is no other choice. Even then, it is in the past, not relevant now.

The reason everyone denies racism is because everyone believes that as soon as racism is discussed, there can be no common ground. A discussion of racism in this country brings to the table 300 years of history. That history includes, of course, slavery and economic exploitation. That economic exploitation generated enormous profits that this country would not exist nor would it be a rich country without slavery. Even now conservative historians claim that the civil was not about slavery. While slavery generated enormous profits, made a very people in this country very rich, it required rape murder, lynchings, destruction of families, civil war and much, much more. The crimes are indeed awesome.

Therefore, everyone believes that bringing the question of racism to the table makes resolution of any problem impossible. But, in fact, that history is already at the table and there can be no resolution without discussion of the relevance of that history.