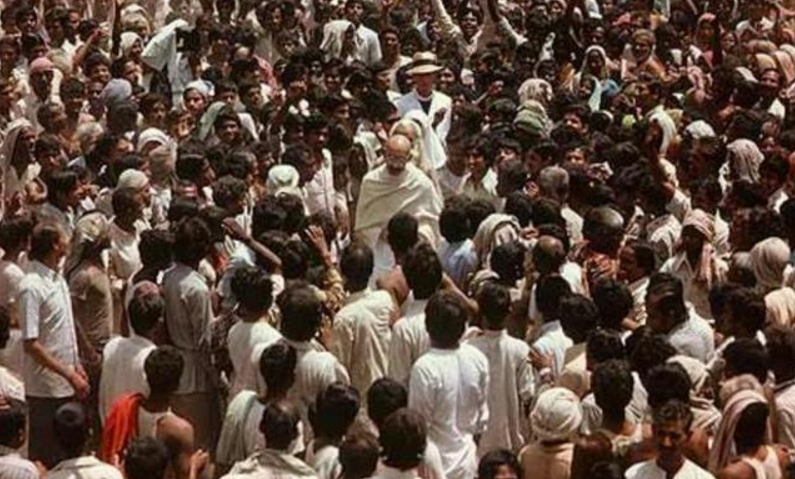 This paper is written to discuss the reasons that a simple film festival is used for political struggle and the ways in which these struggles are framed. The single most important goal of the ruling class is the depoliticalization of the working class. The people who run and control the world can only exercise control when the vast numbers of people are unaware of history, are uninterested in politics and misunderstand their own economic self-interest.

In the movie Gandhi, there is a very telling scene where Gandhi is negotiating with the English generals who control India and who are ideologically committed to the continuation of colonialism. In the scene the English general dismissively condescends to Gandhi stating: “you don’t expect us simply to pack our bags and leave.” Gandhi replies: “that is exactly what you are going to do because 1 million English administrators and troops cannot control 300,000,000 people who are determined to end colonialism.”

This is not to raise the tactical issues of passive resistance but to illustrate the awesome power of a politically motivated working class. Our task therefore is to recapture and broadcast our history and to instill the inspiration of political knowledge. Political knowledge brings unity.

Peoples of the world are stirring beyond what any of us realize. While we have a history of freedom of press in this country, we are now subjected to a controlled media that feeds us propaganda instead of news. The disinformation that is infused into the political consciousness supports the Bush cabal. The seizure of power by a fascist cabal depends on a controlled media. A part of that control means the suppression of our history of struggle. Once we come to terms with this simple truth even though it sounds extreme, we can set our tactics and strategy.

The above exposition necessarily draws with broad strokes but it allows us to view even this film festival in the proper context, gives us energy, and informs our work. One of the most frustrating aspects of the struggles of the 1960’s and the 1970’s was how little we appreciated the impact we were having. It is only in retrospect that we can see how we contributed to the remaking of society. From our subjective viewpoint at the time, the demonstrations were never large enough, the strikes were always lost compared to what we wanted, and the mistakes seemed far more devastating than they actually were.

For example, in the James Johnson case, he did spend time in a prison for the criminally insane, and the money we collected from Chrysler for James was not that much. We had no idea the extent to which shop floor struggles were improved, nor did we understand the tactical advantages that shop floor activists had after this case. Had we understood the interconnectedness of these struggles, we would have understood that we were contributing to the humanization of the institutions of the working class. Had we maintained this perspective, if nothing else our frustration level would have been reduced. More importantly, we would have had more energy and more success in fighting for unity.

Probably the most important misunderstanding was that our analyses always seemed inadequate and the ruling class always seemed two steps ahead of us. That was because we had no idea of the vulnerability of the enemy. That by the way is the single most consistent mistake made by generals in war: overestimating the enemy.

If we can give the current generation a vision of the future as to the kind of world that is possible, the power will be overwhelming. If we can show that that the struggles of the past have been successful, that the sacrifices have been rewarding, then that unity that we all work for will be forthcoming. While it is true that no reform under capitalism is permanent, it is also true that the capitalist ruling class has to respond even to slight assertions of power by working class and that any evidence of unity within the working class will result in concessions.

While we cannot eliminate the problem of our limited perspective, we can be conscious of its existence and compensate for the fact that we cannot know the effect of our efforts. In planning the Progressive Film Festival for April 4th, 5th and 6th, at the Detroit Library, we will be building a knowledge foundation for activists that will serve us repeatedly in the future. The films now are: Salt of the Earth, The Untold Story of Emmett Louis Till, Strange Fruit, Finally Got the News, Panther Women, and Martin Luther King’s last 3 years. A simple example illustrates the point. While there are a few progressives who have not heard of Strange Fruit, they will now know not only the song but also that it is the important popular song of the 20th Century. The drug problems of Billie Holiday dim in comparison to the political contribution that she made.

The theme of the festival is summed up by William Faulkner who said that the past is never dead, it is not even past. The purpose is to reclaim our past, to reveal our true heroes who live today, and to provide a critical analysis of these past struggles in order to inform the tactics of the future.

But even as activists, or because of our activism, we are insufficiently grounded in our own history. As such, we look only to immediate the task at hand or the cost of a particular event rather than the benefit of that event. When even a few people in the NLG are unaware of the significance of the Emmett Louis Till lynching, it stunts the effectiveness of our activists. Even Rosa Parks would readily acknowledge the role that Emmett Louis Till and the courage of his mother in broadcasting this vicious murder in marshaling the resistance to Jim Crow segregation.

Likewise, Finally Got the News was produced here in Detroit but many have not actually seen the film. Grounding our membership and all who see this film in this history sets the basis for a multicultural movement. Many of the young activists who will be attracted to this festival never heard of the Hollywood 10 and how Salt of the Earth was produced. Nor do they realize that the Black Panther Party was not defined by macho violence but by a program to feed hungry school children while defending against police violence. Nor do they know that 50% of the BPP leadership was female.

Likewise, the national media has spent millions of dollars to implant in the minds of this country that Martin Luther King died in 1963, that he never fought against the war in Vietnam, that he did not build a movement of white and black against poverty, or that he had a critical analysis of the failures of capitalism. He always opposed an oppressive economic system that exploited white, black, women, and all national minorities.

While the media has spent billions to wash these memories from collective consciousness of working people, because it is the truth, we can spend far less and have far more success. They must always create another lie to hide the last lie and the bill is coming due. One thing that people do not realize is that the vicious brutality of the Bush administration is not some aberration but an inevitable result of the concentration of wealth in the hands of the most vicious, the most selfish, the most greedy members of our society. As a result, our vision of the future of a society which promotes compassion, altruism, gentleness, decency, and tolerance, stands in stark contrast.